Just three weeks after safely evading a U-boat attack, Cunard Line’s Ascania (1911) ran aground during the night of 13 June 1918 in the Breton Strait, approximately 20 miles east of Cape Ray, Newfoundland. Although the vessel broke up and was a total loss, all on board were rescued. 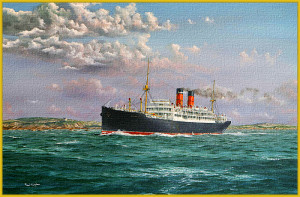 Ascania had a brief yet tumultuous life. Built by Swan, Hunter & Wigham Richardson in Newcastle, England, Ascania was supposed to sail for Thomson Line as Gerona, but was acquired by Cunard prior to her completion and renamed Ascania in honor of the German dynastic House of Ascania.

Ascania was assigned to Cunard’s fortnightly Liverpool-Montreal service. During the First World War, Ascania was converted into an armed merchant cruiser. On eastbound voyages, third class was typically occupied by Canadian troops on their way to French battlefields.