On 8 March 1875, a reckless Adriatic (1872) inbound from New York, hit and sank the schooner Columbus in the Crosby Channel at Liverpool. The schooner’s captain, his wife, three crew members, and a pilot were rescued by the steamer Enterprise, but the captain’s child drowned.

The schooner’s captain later claimed that he hailed Adriatic after the collision, but that the liner continued on her way. Arriving at Liverpool, Adriatic’s Capt. Perry reported only that his vessel had collided with a schooner.

Adriatic was eventually found solely responsible for the collision and Perry was cited as having “lost his presence of mind” for not standing by and possibly saving the child. 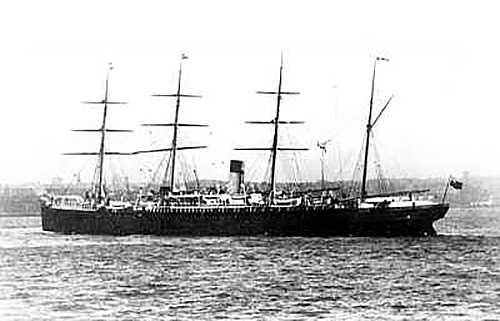 White Star Line’s Adriatic was a collision-prone vessel, to say the least. The previous October, she had collided with Cunard Line’s Parthia, although neither vessel was seriously damaged. In December 1875 Adriatic, while sailing through the St. Georges Channel, ran down and sank the packet ship Harvest Queen of the Black Ball Line, killing the sailing vessel’s entire crew. Harvest Queen was literally plowed under the waves, sinking so fast that Adriatic’s crew couldn’t even identify the ship they had struck. A later records search was required to discover the vessel’s name.

On 19 July 1878 Adriatic ran into the brig G. A. Pike off South Wales, killing five crew members onboard Pike. Adriatic’s excessive speed was later cited as the accident’s cause.