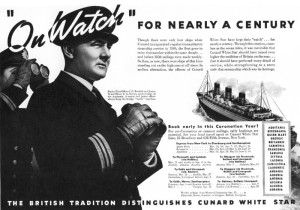 In the 1930s, Boxhall (foreground) appeared in this Cunard Line ad.

Boxhall was off duty when Titanic struck the iceberg. Hearing the lookout bell ring, he hurried to the bridge to offer his assistance. The 28-year-old officer was ordered to begin calculating the stricken ship’s position and to fire distress flares. As Titanic’s situation became hopeless, Capt. Edward J. Smith ordered Boxhall to take command of Lifeboat 2, containing about 35 passengers and crew. After about two hours adrift, Boxhall and the lifeboats’ passengers were rescued by the Cunard liner Carpathia (1903).

Following the disaster, Boxhall remained with White Star Line. After the White Star Line-Cunard merger, Boxhall served as first, and later chief, officer of liners such as the Berengaria, Aquitania, Ausonia, Scythia, Antonia and Franconia. Despite decades of senior-level experience, Boxhall never received his own liner command, his career perhaps tainted by his presence at the Titanic tragedy. Boxhall retired in 1940 .

In later life Boxhall put aside his reluctance to talk about Titanic. He served as a technical advisor on “A Night to Remember,” the 1958 dramatic film that recreated the Titanic disaster with great accuracy. Thereafter, Boxhall would occasionally speak to Titanic researchers. In 1962 he granted an interview to the BBC Interview on the subject.

Boxhall died in 1967 at age 83, the last of  Titanic’s surviving deck officers. His ashes were scattered in the North Atlantic at Titanic’s last known position, calculated by himself on that tragic night.

Hundreds and hundreds! Perhaps a thousand! Perhaps more! My God, sir, they’ve gone down with her. They couldn’t live in this cold water.” (Titanic Fourth Officer Joseph Boxhall to Captain Rostron of the rescue ship Carpathia, when he was asked how many people were left behind on Titanic.)