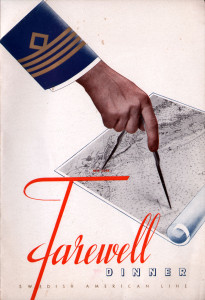 Founded in December 1914 as Rederiaktiebolaget Sverige-Nordamerika, the company began passenger service from Gothenburg to New York the following year. In 1925 the company changed its name to a far more pronounceable Svenska Amerika Linien (Swedish American Line).

SAL played an important role in 20th-century emigration from Scandinavia to the US and Canada. The company also carried many businesspeople and tourists to and from Scandinavia. The company and its ships were the pride of Sweden and the vessels, officers and crewmembers considered the elite of the Swedish merchant fleet.

One former Swedish American Line ocean liner remains the ultra-venerable, much-rebuilt, and frequently renamed Stockholm (1948), which is best remembered for ramming into and sinking Italian Line’s Andrea Doria (1953) on the night of 25 July 1956. In February 2021, the ship renamed Astoria, was put up for auction with a minimum sale price set at €10 million. Final bids were to be submitted by March 1. The deadline passed without any offers. The ship remains in custody in Rotterdam while the owners and creditors deliberate on the next course of action.