The General von Steuben disaster, while not well known, is nonetheless near the top of the list of major ocean liner disasters.

Shortly after midnight on 10 February 1945, the former Norddeutscher Lloyd liner General von Steuben (ex-München) was torpedoed and sunk by a Soviet submarine. An estimated 3,400 died out of the approximately 5,000 people onboard (record-keeping at the time was almost nonexistent), making it one of history’s worst maritime disasters.

General von Steuben was participating in the same Baltic evacuation operation that saw the destruction of Wilhelm Gustloff 11 days earlier in a similar Soviet submarine attack, killing upwards of 10,000 people.

In July 1941, the Soviet government rejected a German request to follow international law regarding the immunity of hospital ships. 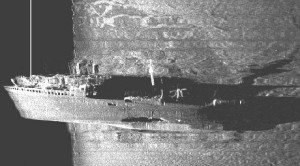 General von Steuben as she exists today on the floor of the Baltic Sea.

Built in 1922 the 17,500-ton General von Steuben was named after the Prussian general who provided invaluable assistance in training the army of the insurgent American colonists during their struggle for independence against the British.

The General von Steuben wreck was located in 2004 by a Polish naval vessel and lies in waters reachable by divers.