Queen Elizabeth’s secret maiden voyage began on 3 March 1940. It was, arguably, the most unusual maiden voyage in ocean liner history. 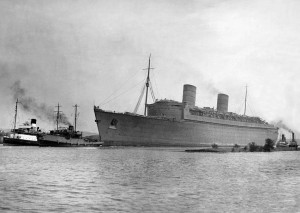 On that day the brand new liner, painted in dreary camouflage grey, quietly left Clydebank, her birthplace. Shortly after departure, secret orders handed to Capt. John Townley directed that rather than heading to her homeport—Southampton—the liner was to begin a unique and perilous long-distance voyage.

Before long, Queen Elizabeth was zigzagging her way across the North Atlantic at an average speed of 26 knots to avoid U-boats. She reached New York intact, where she docked alongside Queen Mary and Normandie in the safety of a neutral harbor (the only time those three great liners would ever meet).