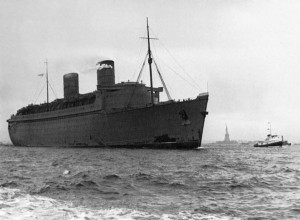 Queen Elizabeth (1940) appears in New York harbor for the first time, unannounced and to no acclaim. (Click to enlarge)

Queen Elizabeth wasn’t afforded the usual greeting New York gives a great ship on her maiden arrival: no crowds on the shore, no fireboats blasting jets of water into the air, no whistles blaring forth from harbor vessels, no aircraft soaring overhead. Instead, great pains were taken to keep her arrival a secret. Queen Elizabeth’s only “passenger” was a befuddled Southampton harbor pilot who was unable to leave the ship after the liner’s destination was abruptly changed to New York.

Queen Elizabeth would remain in New York until 13 November 1940, when she left for Singapore to be converted into a troopship. A traditional maiden voyage would have to wait until the war’s conclusion.

In the dark days of early 1940, people had good reason to fear that Queen Elizabeth would never have a real maiden voyage or, that when the day arrived, she wouldn’t be bearing her current name or flying a British ensign.