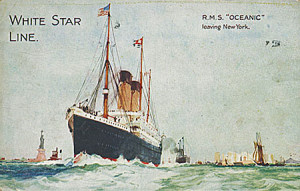 On 6 February 1914, one day out from Queenstown, en route to New York, White Star Line’s Oceanic (1899) was struck by a phenomenon now known as a rogue wave. The wall of water propelled a four-foot-deep torrent along Oceanic’s open promenade deck.

A dozen passengers in deck chairs were swept toward the vessel’s stern. Two unlucky souls, according to a contemporary New York Times report, were forced to swim for the saloon companionway. An even unluckier passenger found himself jammed between two ventilators. 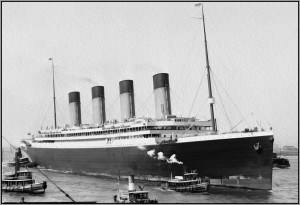 Damage to the ship was relatively minor, however. The wave smashed three deckhouse windows and shattered one stateroom porthole, slashing the occupant’s head. None of the injuries were serious.

The very next day, fleetmate Olympic (1911) was struck by a similar wave. Twelve people, including the liner’s purser, were treated by the ship’s surgeon for cuts from flying glass.