Funnel Phun
Trending
You are at:Home»Features»Oddities»Funnel Phun
By John Edwards on 31 January 2021 Oddities

Have you ever noticed that really old ocean liners built, say, before 1930 or so, had really tall funnels?

There’s a reason for that.

To provide an explanation, we turn to no other than Sir James Bisset, the late Cunard Line commodore. In his 1959 book, Tramps and Ladies, Bisset observed the following: 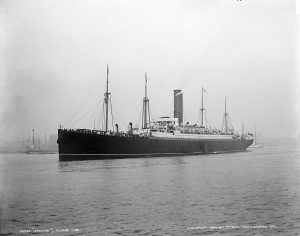 “Funnels were of greater importance in coal-burning steamers than in the later developed oil-burning steamers. One advantage of a tall funnel was that it carried the smoke and soot away from the boat decks—sometimes.”

Bisset then recalled his experience with a pair of Cunard liners featuring particularly impressive funnels:

“The steamer with a single funnel placed centrally in the midships superstructure appeared to be gracefully balanced. But in the Ivernia (1900) and the Saxonia (1900) the very tall single funnel detracted from the graceful appearance of the vessel in silhouette. The funnel was strongly stayed with steel cables, but looked precarious. The modern principles of “streamlining” were scarcely understood, or had not been scientifically studied. So these vessels, although in their hull-form they were sleek Ocean Greyhounds, had what looked like a factory chimney towering amidships, destroying the symmetry of the design. The freakishly tall funnel was an obstruction to airflow which to some extent slowed the vessel’s service speed.”