Delphic, launched on 5 January 1897, is a strong contender for the dubious honor of being the least glamorous ship ever to sail for White Star Line. Built by Harland and Wolff in 1897, Delphic was mostly used for carrying people and cargo between England and New Zealand.

The 8,273-ton Delphic was, in almost every way, a small and ordinary vessel—similar to the type operated by many shipping lines of her era. The twin-screw liner was 475 feet long and had a 55-feet beam. She was rated at a lackluster 12 knots with four masts and a single gangly funnel located amidship. Her appearance could best be described as functional.

Delphic was distinguished only by her military service. She served as a transport during two wars. In the Boer War, Delphic carried troops and horses to South Africa. The liner returned to military service in World War I.

Troops transported by Delphic arrive in South Africa during the Boer War.

Delphic narrowly escaped a U-boat attack in February 1917. On 16 August 1917  Delphic was torpedoed by the German U-boat UC-72 when 135 miles SW of Bishop Rock, Lands End, Cornwall while traveling from Cardiff to Montevideo with a cargo of coal. Five lives were lost.

Delphic didn’t have a fancy dining room or carry famous passengers. There will never be a big budget 3D movie made about this modest little single stacker. But she and her crew died heroically, and we remember her here. 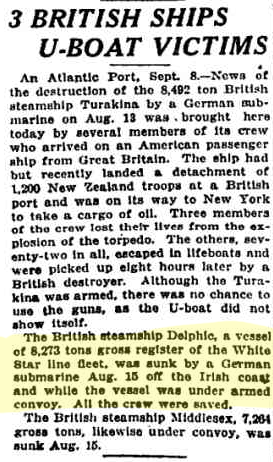 Delphic’s demise rated only six lines in this 9 September 1917 newspaper report, which inaccurately reported that all of her crew was saved. In fact, five crew members died.