The ship that would become Belgic (1903), and hold the distinction of being the only White Star Line vessel built in the US, was launched at New York Shipbuilding, Camden, New Jersey, on 15 December 1903.

Designed to serve as a cattle carrier for Atlantic Transport Line, and named Mississippi at launch, the ship was transferred in 1906 to Red Star Line, another shipping line owned by International Mercantile Marine.  Renamed Samland and registered in Belgium, she followed the Antwerp-New York route and Antwerp-Philadelphia routes.

On 30 August 1911, Samland was transferred to the White Star Line (also owned by IMM), renamed Belgic, and registered in Liverpool. In 1913, Belgic reverted to Red Star Line ownership, and again assumed the name Samland.

In 1930, after lying idle for over two years, Samland was scrapped in Ghent.

The 9,748-ton Mississippi/Samland/Belgic was 490.4 feet long with a beam of 58.2 feet. She featured three decks, four masts and a single funnel. A pair of triple expansion engines powered her at a service speed of 14 knots. She specialized in carrying cattle from US ranches to European markets. On westbound voyages, she likely carried emigrants to the US, although details about this fact are sketchy. 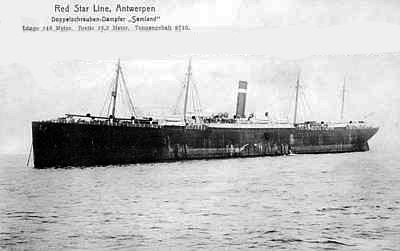