On 6 November 1942, Ellerman Lines’ City of Cairo, en route from Cape Town to Pernambuco, Brazil, was torpedoed and sunk by a U-boat 480 miles south of St. Helena.

As Capt. William A. Rogerson ordered, “Abandon ship,” the liner’s 101 passengers, including 28 women and 19 children, as well as 210 officers and crew, took to the lifeboats.

City of Cairo in her wartime livery.

After the ship went down, U-68 surfaced and came close abeam of one of the lifeboats. Korvettenkapitän Karl-Friedrich Merten, U-68’s commander appeared and asked what ship he had sunk. After learning the vessel’s name, Merten gave the survivors the best course to steer for land. He then remarked, “Goodnight. Sorry for sinking you.” He returned inside and U-68 sailed away. 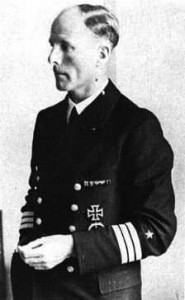 Another three survivors were picked up by a German merchant ship on 12 December 1942. On 27 December, 51 days after the attack, only two survivors—City of Cairo’s third officer and a female passenger—remained alive when their lifeboat was picked up by a Brazilian Navy vessel.

A salvage expedition to the City of Cairo wreck, completed in  September 2013, recovered several tons of tons of silver coins from a depth of 5,150 meters (16,896 feet)—a world depth record. The salvers left behind this plaque. 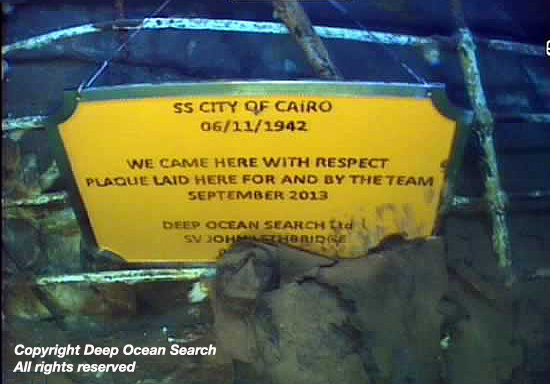