The liner, after being retired by Cunard-White Star Line in 1936, began a new life in April 1937 as the cadet training ship HMS Caledonia. Retaining her White Star livery, Caledonia (with shortened funnels and the addition of seven deck guns) served the Royal Navy until the outbreak of World War II. 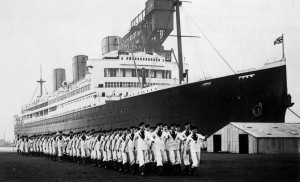 When World War II erupted in September 1939, Caledonia’s cadets and instructors were moved to more secure facilities on shore. The decision turned out to be very prescient since, on 29 September, the former liner’s naval career ended in the massive blaze. If the fire had occurred prior to the move, lives would have almost certainly been lost.

The wreck was sold to a breaker in March 1940, but it was not until 17 July 1943, that Caledonia’s remains were finally raised and towed to the scrapyard. Her bell was later placed in St Nicholas Church, Dereham.

For a look at cadet life on board HMS Caledonia, see the British Pathé newsreel on this page.