Few ocean liners were ever equipped with paravanes, yet Queen Mary had a complete set. 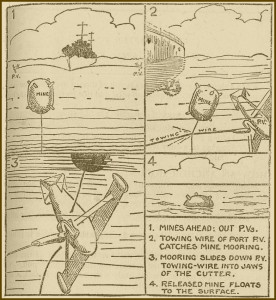 On 5 August 1940, Queen Mary entered a graving dock in Singapore for conversion into a troopship. The paravanes were added during the refit.

The brainchild of British inventor Sir Dennistoun Burney, paravanes are underwater gliders designed to sweep enemy mines. Streamed out from the bow, a paravane uses its towline to cut the mooring cable of any undersea mine it encounters, bringing the explosive device to the surface for safe detonation by gunfire.

Queen Mary’s paravanes were deployed as a primary security measure throughout her life as a troopship. The devices took on added importance exactly three years after their installation began. On 5 August 1943, British Prime Minister Winston Churchill boarded Queen Mary in Gourock, Scotland, bound for Halifax, Canada, and the second Quebec “Quadrant” conference. Due to the vital importance of this Queen Mary passenger, mines posed an even more serious threat than usual.

Queen Mary’s paravanes were removed at the war’s end during her conversion back into a civilian ocean liner. The way the world is headed these days, paravanes could very well soon make a comeback on cruise ships. 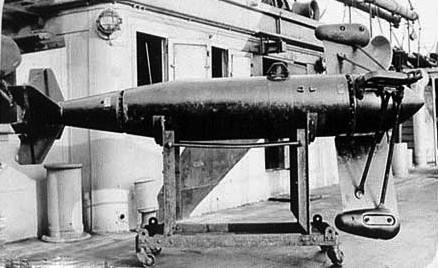 Click here to see dozens of more stories about ocean liners in wartime.