Georgic was the liner that wouldn’t die. 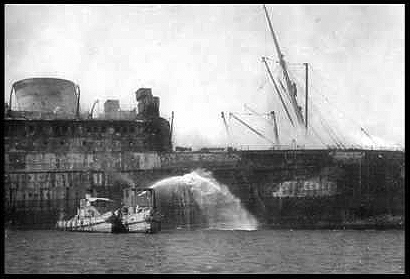 Like many of her fleetmates, Georgic (1932)—the final liner built for White Star Line prior to the company’s consolidation with Cunard—served as a troopship during World War II. On 14 July 1941, while docked at Port Tewfik near the Suez Canal, she was spotted by German aircraft and attacked.

Two bombs were dropped: one struck Georgic’s stern, creating a fire that spread to the ship’s dummy funnel. Within minutes, ammunition stored inside that funnel exploded, seriously damaging the vessel. As Georgic began sinking by the stern, the order to abandon ship was sounded. Engulfed in flames, the ship settled to the bottom and gradually burned out.

But Georgic’s story doesn’t end there.

A few months later, Georgic was patched up and refloated. She was then sent back to her maker, Belfast’s Harland & Wolff, and completely rebuilt. By late 1944, Georgic was ready to resume her role as a troopship, minus her forward funnel and with a shortened foremast. She continued serving the Royal Navy far past the war’s end, carrying troops and other personnel between continents until 1948. She then spent a couple of years shuttling displaced civilians.

In May 1950, Georgic was finally returned to Cunard-White Star Line to again sail transatlantic routes. But first she had to be refurbished and repainted in her original White Star livery.

Her civilian life was again interrupted, however. Soon, she was back under Admiralty control, transporting troops to and from the Korean War. That assignment marked the end of the line for Georgic. She was laid up in 1954 and scrapped in February 1956.

Georgic wasn’t a glamorous vessel by any means, but she served her country longer and more steadfastly than any other liner. That’s something worth remembering.