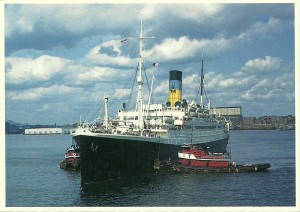 In this short color newsreel we join the liner, which served as a troopship during World War II, as she is docked in Southampton. Mostly, we get a chance to become acquainted with Baldur, an Alsatian (aka a German Shepherd), who joined the ship’s company in Bremen (naturally). Among other things, we learn that Baldur can go for walkies in New York, but isn’t allowed to set a paw down in Southampton due to quarantine restrictions. We also discover that Baldur doesn’t like to be forced to wear a life vest. Nowadays, if there are dogs on a cruise ship they have to wear a belly band for dogs to prevent any spraying. Seems Baldur wasn’t under such constraints.

There’s no record of Baldur’s fate, but New York was scrapped in Japan in 1961.

There’s a rare color glimpse of Southampton’s classic Ocean Terminal near the the end of the newsreel.

It’s hard to image a dog or cat mascot on a 21st century ocean liner or cruise ship. It would no doubt violate all sorts of international, government and corporate rules and regulations.

Where has all the fun gone?

Did you like this article? Consider making a fast and easy donation of any amount by clicking here.
Like Baldur, Oceanliners Magazine depends on the kindness of friends. 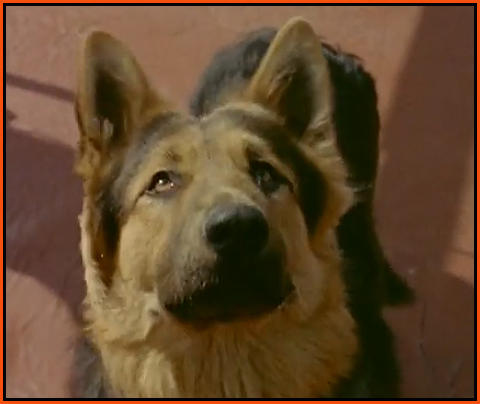 Baldur Thanks You! Woof!