HMT Queen Mary began what has come to be known as “The Long Voyage” on 23 December 1942. Capt. James Bisset, a future Cunard Line commodore, was in command. 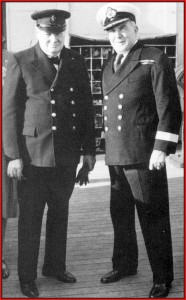 The route: Gourock, Scotland, via the Suez Canal, to Sydney and then back to Gourock, returning on 22 April 1943. Total distance covered: 37,943 miles. Queen Mary burned over 56,000 tons of fuel oil during the voyage. She carried over 30,000 troops and the stores required for feeding the troops and crew totaled 3,876,600 lbs in weight.

For Queen Mary’s officers and crew, “The Long Voyage” was nothing less than an ordeal. Constant work in often torrid climates, far different from the North Atlantic weather conditions Queen Mary had been designed for, exerted a toll on both physical and mental health. Worse yet was the constant danger of enemy attack.

Shortly after her return to Scotland, on 5 May 1943, the “Grey Ghost” undertook another critical mission: transporting Prime Minister Winston Churchill from Gourock to New York to meet with President Roosevelt. Approximately 5,000 German prisoners of war were also onboard.