Columbus (1924,) one of Norddeutscher Lloyd’s finest and most popular liners, was intentionally sunk by her own crew on 19 December 1939. The story behind this sad event began unfolding several weeks earlier. 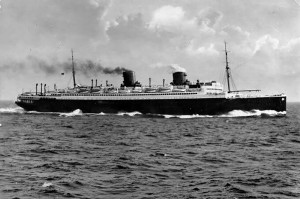 In late August 1939, just days before war broke out in Europe, Columbus was returning to New York from a Caribbean cruise. En route, she received a radio message from the German government ordering her to change her course to Havana. Upon arrival, Columbus discharged her passengers, mostly Americans, and headed to temporary sanctuary in Vera Cruz, Mexico. On 5 October she returned sea with the intent of getting safely back home to Germany.

Things didn’t exactly work out as planned, however. The British Royal Navy, well aware of Columbus’ plans, intended to either capture or sink the liner.

Columbus’ end came on 19 December 1939. As a British warship closed on her wake, she was scuttled by her crew approximately 400 miles off of the New Jersey coast, near the mouth of the Delaware Bay. A neutral US Navy vessel, USS Tuscaloosa, picked up the liner’s crew members, who were treated as rescued seamen, not prisoners of war.

As of December 2016 the wreck’s exact coordinates remain unknown.