I’m old enough to remember many shipboard traditions that are no long observed on today’s oh-so-modern and cool vessels.

Try these on for size:

Bon Voyage Parties. Meet your friends onboard for a big farewell blast. Wow, I really miss this grand tradition. Well, mostly I really miss the free booze my friends would bring onboard.

Throwing Confetti and Streamers When Leaving the Pier. Such fun. It was just like New Year’s Eve, especially on those December 31st departures. It did make something of a mess, though. 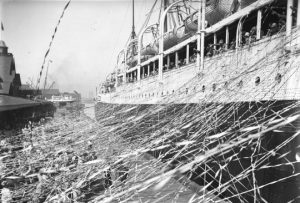 Passenger Lists. When did they do away with passenger lists? For many of us, it was the first time we ever saw our names in print. Sometimes, you would spot a famous name among all the nobodies. 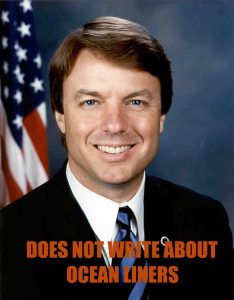 Passenger 1: “Oh, look, John Edwards is sailing with us!”

11 a.m. Bouillon. I, for one, could never stand the watery slop, but it was fun watching people queue/line up for it. I suspect many had no idea how it would taste.