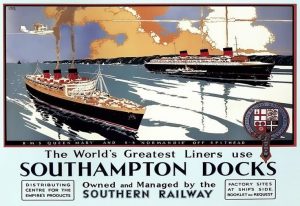 On 2 August 1937, at the height of the golden age of superliners, French Line’s Normandie retook the Blue Riband from Cunard-White Star Line’s Queen Mary, completing a westbound transatlantic crossing in 3 days, 23 hours and 2 minutes at an average speed of 30.58 knots. Queen Mary had snatched the high-speed honor away from Normandie the previous year. Queen Mary would again reclaim the Blue Riband in 1938.

Just a few years later, Normandie would lie capsized in New York harbor, a burned-out hulk. Queen Mary, meanwhile, would be setting records nobody in 1937 could have ever imagined, much less desired. On 2 August 1942, HMT Queen Mary achieved the distinction of becoming the first ship to ever carry a complete military division: the US Army First Armored Infantry Division (15,125 troops, 863 crew).

The golden age was most certainly ending.