United States (1952) transported many stowaways during her years at sea, but Eugene Hart may have been the youngest.

The Brooklyn lad was only 11 years old in September 1954 when he decided to take the subway into Manhattan and sneak onboard United States for the trip of a lifetime. Other than a couple of days of seasickness, Eugene said he enjoyed the roundtrip voyage.

Later interviewed on American television (the “Today” show), Eugene said he left home because “Grandmother threw a knife at me.” He later recanted that statement after his mother began shaking him.

Had there been family counseling (or Jerry Springer on TV) back in 1954, the Harts would have been ideal participants. 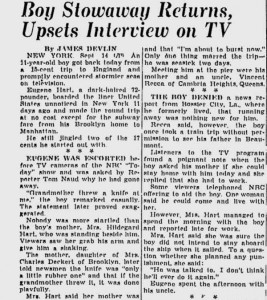