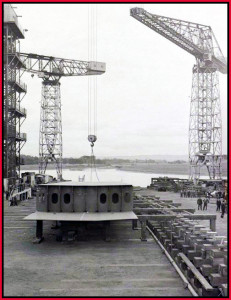 The keel laying ceremony for the ocean liner that would become Queen Elizabeth 2 took place on 5 July 1965 at John Brown & Co., Clydebank. The keel was laid on the same slipway used for Queen Mary’s construction.

The silent video above shows engineers testing a model of QE2’s hull in a water tank, followed by (at the 3:15 mark) footage from the keel laying ceremony.

Like Queen Mary, the new ship did not receive a name until the day of her launch, 20 September 1967. Until then, she was simply known as “Hull 736.”