Lloyd Triestino Line’s Galileo Galilei was launched on 2 July 1961. The liner, designed to carry emigrants from Italy to Australia, departed Genoa on her official maiden voyage (after running a handful of Mediterranean cruises) on 22 April 1963, bound for Sydney. 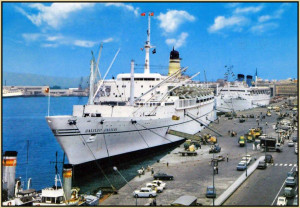 As expected, Galileo Galilei’s route became highly profitable for Lloyd Triestino, and the liner was joined on the run later that year by her new sister ship, Guglielmo Marconi.

It was smooth sailing for Galileo Galilei until the early 1970s, when skyrocketing fuel prices, a sagging global economy, airline competition, and dwindling Australian immigration combined to make her a very unprofitable vessel. She was pulled off her Australian run in April 1977. By October 1977 a refitted Galileo Galilei was back at sea in her new role as a cruise ship. Profits continued to be elusive, however, and she was laid up again in September 1979.

In 1999 an engine room fire out the ship’s life. All 1,090 passengers and crew were safely evacuated, but the stylish little liner, which helped so many people find a new life on a new continent, fell under the waves in the Strait of Malacca on 21 May 1999.