QM2 Cocktail
Trending
You are at:Home»Features»Oddities»QM2 Cocktail
By Cunard Line on 11 January 2016 Oddities
Showing 1 of 3
Next

As QM2 departs on her world cruise, Cunard debuts a new cocktail:

Three of the world’s most highly acclaimed brands, renowned for their traditions of service and excellence, are embarking on a unique collaboration that circumnavigates the globe. This January, Cunard, The Savoy and Jack Daniel’s will produce Age of Discovery – a specially created, barrel aged, limited edition cocktail. 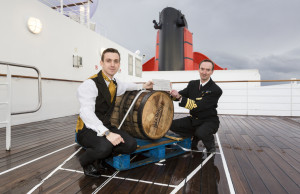 The cocktail itself will mature in a hand chosen 300 litre, Jack Daniel’s barrel to be taken on board Cunard’s flagship Queen Mary 2 during her 41,000 nautical mile, four-month World Voyage – departing from Southampton on January 10, 2016.

Age of Discovery has been formulated by the team at the world-famous Savoy Beaufort Bar, named Best International Hotel Bar 2015. Inspired and influenced by the tastes and aromas of the continents Queen Mary 2 will visit, from Europe to Asia, Africa, the Americas and Oceania, the Jack Daniel’s cocktail will be mixed at The Savoy before the barrel is sealed and bonded for its World Voyage.