My parents and sister emigrated to America on Queen Mary in October 1949. I didn’t come along. I made the mistake of being born in New York in 1954, thereby missing my one and only chance to experience a transatlantic crossing on one of history’s greatest ocean liners.

Like most people of their generation, my parents were born just in time to experience the deprivations of the Great Depression and the horrors of World War II. Both my mother’s family (in Hamburg, Germany) and father’s family (in Portsmouth, England) were bombed out several times during the war. 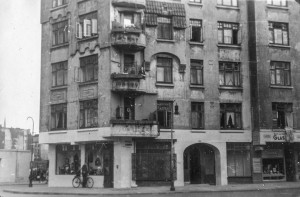 My grandparents’ apartment was on the third floor. Free rifle storage provided..

A Traditional Love Story
My parents hooked-up in the old fashioned way—at gunpoint. He was a British Army driver stationed in occupied Hamburg and she was a war widow. They met, somehow, through mutual acquaintances (my parent never revealed the details to me). Anyway, on their first date, dad brought along his rifle to my grandparents’ apartment. My grandmother graciously offered to place it safely in a closet. Dad held on to that rifle with a death grip.