A few months after dad returned to Portsmouth, my mother and sister followed. Mom and dad were married in Portsmouth in October 1947. 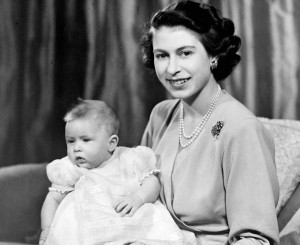 Princess Elizabeth and Charles, blissfully unaware of the coincidental birthday.

Living in post-war Portsmouth was pretty rough for my mother and sister, particularly when they spoke German in public (which was more or less always). Mom didn’t make things easier, either. For instance, when Princess Elizabeth gave birth to Prince Charles on 14 November 1948, mom proudly told all the neighbors that the future king (we/he are still waiting) would share a birthday with her. Mom couldn’t understand why nearly everyone she told reacted with either a grimace or wince. After all, as she liked to remind everyone, the whole royal family was really German anyway. Mom was a real diplomat.

By early 1949, mom and dad decided it might be a good idea to move to New York. One of mom’s cousins had moved to Long Island several years before the war, eventually marrying a butcher shop owner who did a brisk business during the war years supplying black market prime ribs and steaks to local country clubs and caterers. This couple agreed to sponsor my parents’ immigration.