Here’s a brief video showing interior (and some exterior) views of Hanseatic (1930), ex-Empress of Japan/Empress of Scotland  of Canadian Pacific Line. 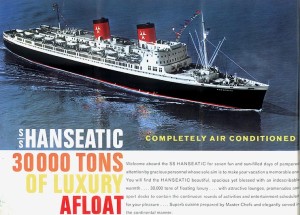 After her acquisition by the new Hamburg Atlantic Line, the liner was radically rebuilt to both modernize the ship and fully adapt her to a North Atlantic environment. (Empress of Japan/Scotland had spent most of her service life on generally warmer trans-Pacific routes.)

The liner’s superstructure and funnels were extensively rebuilt (one was removed) and passenger accommodations were re-configured. The 30,030 GRT Hanseatic, sailing under the flag of West Germany and with a homeport of Hamburg, was designed to carry as many 1,350 first and tourist class passengers in comfortable luxury on a Hamburg-New York route. To save costs, Hanseatic actually docked in Cuxhaven on many of her voyages. Passengers were transferred to and from Hamburg via a boat train.