We called him “Smiley,” but that wasn’t his name.

First off, he was German, so it’s unlikely that his parents would have named him Smiley. Something like “Heitermann,” perhaps, but definitely not Smiley.

Smiley was a crew member on the first Hanseatic (ex-Empress of Japan/Scotland). His job was to appear on deck shortly before lunch and dinner and play a little handheld chime. That was how we Tourist Class passengers knew that the restaurant was open. Today, a mobile app could do the job just as well or perhaps even better (but the cruise line would charge you $1.99 to download it).

Smiley was always smiling as he performed this twice-daily ritual. He then would scamper down below to stand at the restaurant door. Smiling, of course.

Smiley really irked me (8 years old) and, to a lesser extent, my brother, Jim (6). We were both from New York. We weren’t used to people smiling at us. It made us feel funny.

Smiley’s wardrobe didn’t help. He was dressed like the bellboy you often see in a 1930s-era movie (or on a mechanical chimp holding a pair of cymbals). I’m guessing he was in his late teens and somewhat shorter than five feet (although time and poor memory may have exaggerated these calculations one way or the other). 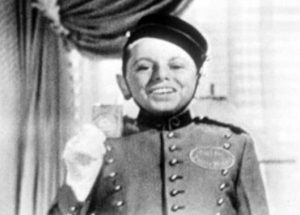 Not Smiley, but a rough approximation.

In any case, it soon became my mission to make Smiley stop smiling. (Forever, if possible.)

During the voyage’s first days, I tried a few times to engage Smiley in conversion. Yet it quickly became apparent that he had little or no command of the English language.

I soon decided to use this fact to my evil advantage. So, by about the fourth or fifth day of the nine-day voyage, we (mostly me) began returning Smiley’s “Willkommen” or “Guten abend” with an almost equally cheerful, “You look like a idiot” or “Your shoes smell.”

I wish I could tell you that Smiley eventually caught on to what we were doing, or that a nearby English-fluent eavesdropper grasped us in our little act, but neither happened.  In fact, we pulled the same stupid stunt several times on the return voyage.

I really shouldn’t admit such things. I feel terribly ashamed.

Wherever he is, I hope Smiley is still smiling.

And I hope that he no longer looks like an idiot and that his shoes are forever bright and clean.