As 1931 wound down and the deepening Great Depression steadily reduced North Atlantic passenger traffic, particularly during the traditionally slow winter season, more liners were assigned to cruise routes. Yet cruise sales also proved vulnerable to the collapsing global economy. The result was a massive capacity glut. 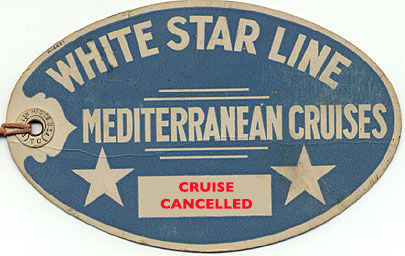 Leave your bags at home; the cruise has been cancelled.

Financially shaky White Star Line reacted to the situation swiftly and mercilessly. On 30 December 1931, The New York Times reported that in addition to canceling a Britannic (1929) cruise to the Mediterranean from New York on 9 January, White Star was also eliminating three cruises planned for Homeric (1922)—two to the Mediterranean (23 January and 23 February)—and one to the Caribbean (5 April) due to “overenthusiasm” in scheduling winter cruises.

Other lines also reacted to the worsening economic climate by canceling scheduled cruises. The Times noted that Belgenland, Aquitania and Leviathan all had cruises recently canceled by their respective owners as the shipping lines cut back their schedules to meet a rapidly diminishing demand.

By 1931, the Great Depression had reduced passenger traffic on the North Atlantic by fifty percent.

Be sure to check out the 1931 cruise bargains on the following pages. These historic prices will never be repeated!