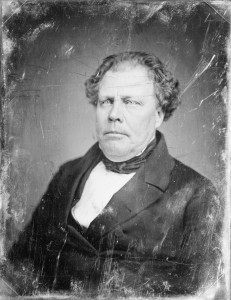 American Edward Knight Collins owned the New York and Liverpool United States Mail Steamship Company (Collins Line) founded by his father in 1818. Collins Line was also sometimes known as “Dramatic Line,” because its ships were named after Shakespeare and other noted dramatists and actors. In the late 1840s the company shifted service to steam, sold all of its sailing vessels, and reorganized as a completely new Collins Line.

In 1849, after successfully lobbying the US government for an annual transatlantic mail contract, Collins commissioned four sister liners: Atlantic, Pacific, Arctic and Baltic. The first of these vessels, Atlantic, began her maiden voyage on 27 April 1850.

Collins’ ships were the largest, fastest, and most luxuriously appointed steamships in the world, far superior to the vessels operated by arch-competitor Cunard Line. Collins’ liners featured stained glass skylights, steam heat in public rooms and 3,500-bottle wine cellars. Collins himself became one of the world’s wealthiest men.