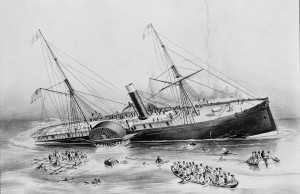 An artistic depiction of the Arctic disaster.

It all started crashing down on 27 October 1854, when the Collins paddlewheeler Arctic sank after colliding with the French screw-driven steamer Vesta in fog off of Cape Race, Newfoundland. Of the over 400 people onboard Arctic, only 86 survived. Among the victims were Collins’ wife and two of their children.

Putting his grief aside, Collins began planning the line’s largest and most luxurious ship to date. But in January 1856, before the new vessel could be completed, the former Blue Riband holder Pacific disappeared without trace after leaving Liverpool. It is now believed that she most likely hit an iceberg and sank. The wreck has never been found.