Born on 30 March 1874 in in Chorley, Lancashire, England, Lightoller was second officer on Titanic and the most senior officer to survive the sinking. He was a hero in both the Merchant Navy and the Royal Navy. 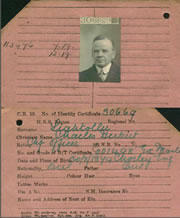 Early Years
Lightoller’s father left for New Zealand, abandoning his family and young Charles. At age 13, seeking adventure beyond Lancashire, Lightoller began a life at sea with a four-year seafaring apprenticeship on the barque Primrose Hill. After surviving a shipwreck, malaria and assorted other nautical calamities, Lightoller headed to Canada’s Yukon Territory 1898 to prospect for gold in the Klondike Gold Rush. When that venture failed to pan out, he moved to Alberta and became a cowboy. Tiring of the western life, Lightoller earned his passage back to England as a wrangler on a cattle boat.

After receiving his Master’s certificate, Lightoller returned to the sea in 1899 as third mate on a cattle boat. This work led to Lightoller joining White Star Line in 1900 as Medic’s fourth officer. He later joined Majestic (1889) under the command of Capt. Edward J. Smith, later to become Titanic’s first and only captain.