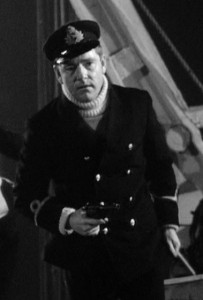 Actor Kenneth More as Lightoller in “A Night to Remember.”

Titanic
Lightoller was off duty when Titanic struck the iceberg, relaxing in his bunk when he felt a slight jarring. He quickly got dressed and ran onto deck, where he checked each side of the liner for signs of damage. Seeing nothing amiss, Lightoller went back to his cabin. Soon, Fourth Officer Joseph Boxall appeared at the door and informed Lightoller that Titanic had struck an iceberg and that the water was already up to the Mail Room on F deck.

Lightoller behaved heroically during the Titanic tragedy. He was in charge of lowering the lifeboats on Titanic’s port side,  saving countless lives simply by maintaining firm order. As Titanic began her final plunge and water washed over the bridge, Lightoller struggled to free and launch Collapsible B on the port side. Later, as Titanic slipped below the waves, Lightoller was able to swim to Collapsible B and take command. Lightoller was the final Titanic survivor to board the Cunard Line rescue ship Carpathia.