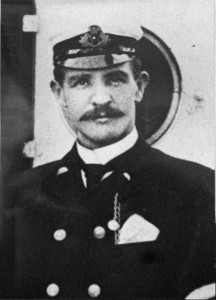 William McMaster Murdoch, first officer of Titanic  (1912), was born in Dalbeattie, Scotland, on 28 February 1873. Murdoch was the officer in charge on the bridge when Titanic fatally collided with an iceberg. He was also one of the over 1,500 people who died in the disaster.

Murdoch joined White Star Line after working on several sailing vessels. Assigned to White Star’s Australian service, he served on both Medic and Runic. He was later transferred to the Atlantic liners Arabic (1903), Adriatic (1907), Celtic (1901), Germanic (1875), Oceanic (1899), Olympic (1911) and, finally, Titanic. In 1907, Murdoch married a New Zealand school teacher, Ada Florence Banks, whom he met in 1903 while heading to England on either Runic or the Medic.

According to the accounts of several surviving eyewitnesses, Murdoch worked diligently after the collision to load passengers into the far-too-few lifeboats. Yet in at least two Titanic movies Murdoch was shown shooting passengers and himself during the sinking. No credible proof of these actions has ever emerged, and it’s likely that these scenes were simply, and unfairly, added to the films to create dramatic tension. Murdoch’s body, if recovered, was never identified.