Ocean liner hotels—lodging facilities owned or subsidized by a shipping line—were unique. Located in port cities and usually positioned at or very close to the point of embarkation, they served legions of globetrotting businessmen and wealthy international travelers. The number of such hotels has dwindled over the decades.

Among the survivors is The Empress in Victoria, British Columbia. It’s a typical ocean liner hotel in that it’s staid, dignified, lushly comfortable and thoroughly Edwardian. Today, The Empress sits at the brink of the provincial capital’s waterfront, silently waiting for liners that will never again arrive. While Victoria still attracts it a large number of big passenger ships from Holland America, Royal Caribbean, Celebrity and other major cruise lines, the vessels all now dock a few miles to the south of Victoria’s main harbor. 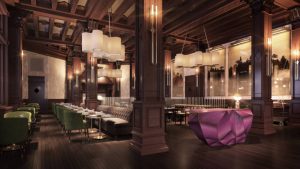 The Empress was owned and operated by Canadian Pacific Line, a company that at one time operated a transcontinental railway and liners on two oceans. In 1904, when The Empress was built, one could travel from London to Yokohama via Canadian Pacific liners, trains and hotels and never leave the company’s gentle embrace. The Empress served passengers ready to begin the trans-Pacific portion of their journey.

Victoria is a wonderful city. It’s large enough to have a vibrant cultural life yet not so big as to feel overwhelming. Today, the Empress still attracts a large number of guests, despite the fact that liners no longer sail to within a block of her front doorstep.