John George “Jack” Phillips, senior Marconi wireless telegraph operator onboard Titanic, was born in  Godalming, England, on 11 April 1887. He celebrated his 25th and final birthday on board the doomed liner. 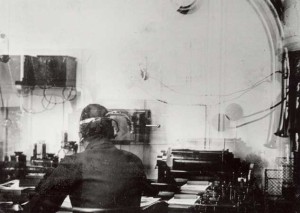 The only known photograph of Titanic’s Marconi room. Taken by passenger Fr. Browne, who disembarked in Queenstown. (Click to Enlarge)

Phillips began his career at the Godalming Post Office, where he learned telegraphy. He then went to work for the Marconi Company and graduated as a wireless operator in August 1906. Phillips then served onboard both White Star Line and Cunard Line vessels, including Teutonic, Campania, Corsican, Victorian, Pretorian, Lusitania and Mauretania. In 1908 he was stationed on shore in Ireland before returning to sea in 1911 onboard Adriatic and Oceanic.