On the evening of 14 April, Phillips was at the key of Titanic’s wireless station sending a backlog of personal messages through Cape Race when the ship Californian sent through an ice warning. Phillips responded brusquely, “Keep out, I am working Cape Race.” 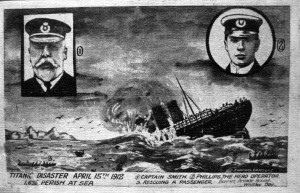 Similar warning messages had been received throughout the day and were quickly passed to Capt. Edward J. Smith.

Shortly before midnight, junior operator Harold Bride woke up and took over the key from Phillips.  To the astonishment of both operators, Capt. Smith suddenly appeared in the wireless room and ordered Phillips to send out a distress call. Phillips immediately began sending out the distress signal, first CQD (“Calling All Stations: Distress”) and later SOS as well. A few minutes later, Smith returned with Titanic’s estimated position.  Phillips and Bride continued calling for assistance until the last possible moment.