To the surprise of… well, virtually no one, Clive Palmer’s much publicized plan to create a Titanic replica appears doomed. 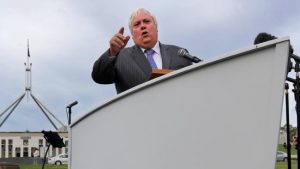 An Australian newspaper, The Courier-Mail, reports that investment in the project slowed from almost AU$5.9 million between April 2012 and April 2014 to a mere trickle thereafter.

“While AU$1.9 million of that went to project management fees, another AU$3.3 million was spent on lavish marketing of the venture in the US and Britain,” the newspaper reports.

The mining magnate announced his plan to build a replica of the famous liner amid much fanfare on board USS Intrepid in New York harbor in April 2012. As recently as last February, a Palmer representative was predicting a 2018 launch.

Titanic II was supposed to offer nine decks and 840 cabins in three classes, capable of accommodating 2,400 passengers and 900 crew members. Other amenities would have included a swimming pool, Turkish baths and gyms, among other amenities.