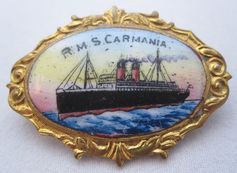 Carmania (1905), a liner that mixed style and muscle, was launched at Clydebank’s John Brown and Co. on 21 February 1905. Carmania and her sister ship, Caronia (1905), were for a time, the largest and fastest liners in the Cunard fleet.

The 19,566-ton Carmania was 650 feet long with a 72-foot beam. The triple-screw liner was rated at a touch over 18 knots. She featured two masts and two funnels. Carmania was the first Cunarder to be fitted with steam turbines and, as a result, was always a faster ship than her sister, which used older quadruple-expansion engine technology.

Author H.G. Wells traveled to the US on Carmania in early 1906. He wasn’t impressed. He later wrote, “This Carmania isn’t the largest ship nor the finest, nor is to be the last. Greater ships are to follow and greater.”

As an armed merchant cruiser in World War I, Carmania met Hamburg South America Line’s Cap Tafalgar (1914), a German liner also converted into an armed cruiser, in the remarkable Battle of Trindade. The 14 September 1914 encounter off the Brazilian coast was remarkable in that it was the only time in history that two ocean liners faced off against each other in a sea battle. Carmania received 79 shell holes, and her bridge was destroyed in the battle, but the damage was not severe enough to prevent her making port for repairs. Cap Tafalgar was less fortunate—she sank.

Carmania returned to the Cunard fleet after the war. Like so many of her counterparts, she was killed by the Great Depression. Carmania was sold to shipbreakers in November 1932.