Inside Rex
Trending
You are at:Home»Style»Interiors»Inside Rex
By John Edwards on 30 November 2015 Interiors
Showing 1 of 25
Next

Italy had never been a major player in the North Atlantic liners race, but Benito Mussolini was intent on making his nation a world power, and Il Duce felt that a sleek, modern liner would help project Italy’s image as a great innovator and commerce leader. 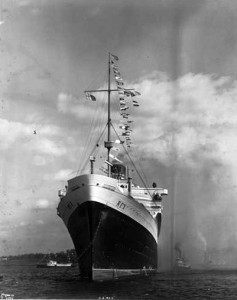 Rex turned out to be a regal liner in nearly every way (except, perhaps, in mechanical reliability). Rex was a world-class ship of state, although she represented something of a throwback in style. While the greatest liners of the era, including Normandie, Bremen and Queen Mary, all embraced the new Art Deco movement, Rex was steeped in classic—some would say stodgy—design.

Yet no expense was spared in creating a luxurious, sumptuous superliner that was more like a floating resort than a maritime version of a big city hotel. Real beach sand was often sprinkled around her swimming pools to drive home the point at she was the “Riviera Afloat.”

So was Rex stodgy or sumptuous (or perhaps even both)? You can judge for yourself as you take a look inside Rex, Italy’s ship of state.