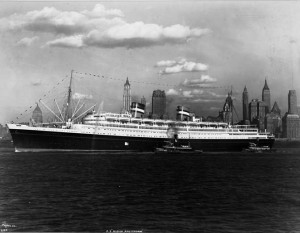 The “Darling of the Dutch” was a true ship of state for the Netherlands, just as Queen Mary represented Britain, Normandie represented France, Bremen represented Germany and Rex represented Italy.

Like most of those liners, Nieuw Amsterdam featured a modernistic Art Deco interior design. Yet, unlike her contemporaries, Nieuw Amsterdam’s Art Deco flavor had a strong Machine Age influence, a look that would be fully embraced by the future American liners America and United States.