A menu from Titanic’s first-class restaurant sold for £60,000 and a small locker key went for £62,000 at the an auction held on 18 October at Henry Aldridge & Son in Devizes, Wiltshire, England. More than 250 artifacts relating to the doomed 1912 vessel went under the hammer at the memorabilia specialists .

The menu was part of a collection owned by maid Elise Lurette, which sold for a total of £100,000. French-born Lurette was one of approximately 700 people who survived when Titanic hit an iceberg on its maiden voyage on 14 April 1912. In her coat pocket was a menu, dated April 12, listing foods such as mutton chops, Melton Mowbray pie and tapioca pudding. A deck plan used by Ms Lurette to help find her way to a lifeboat was sold for £33,000, almost double the anticipated price. 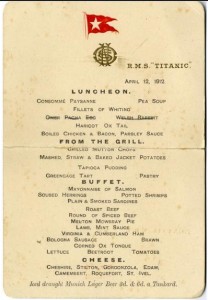 A letter by Titanic engineer Joseph Bell describing how the vessel almost hit two other liners as it left Southampton docks sold for £24,000. A small locker key owned by Southampton resident Sidney Sedunary sold for £62,000. Sedunary’s body was later recovered and his possessions, including his pocket watch and keys to his cabin—number 45 on E deck—were sent to his pregnant wife Madge. 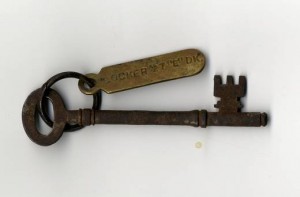