Children play a big role on today’s cruise ships. There’s even one cruise line that’s more or less built entirely around kids. This certainly wasn’t the case during the golden age of ocean liners.

Back then, kids were generally seen, not heard. In fact, they really weren’t seen all that much, either. On most liners, the little ones were stuffed into nurseries and playrooms for the majority of the day. No brats running rampant in the public rooms or passageways.

On many liners, usually at around the crossing’s mid-point, a children’s party was held. The first- and/or second-class dining room would be festooned with balloons, streamers and various other festive decorations. The kids would be herded in, given a funny hat, served a dish of ice cream and… well, that was about it. The parents would stand around and watch the kids eat. The kids would look back at their parents. There would be some crying, both kids and parents. 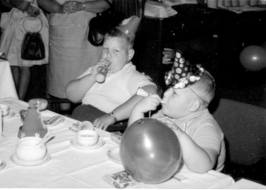 Oh, and there was usually a clown—typically an unlucky lower-ranking member of the restaurant staff pressed into service to scare the kids into obedient submission.

Another grand tradition of the sea that is no more.

One of these days, I’ll have to tell you about the Hanseatic activity that involved having the ship’s kids parade down the Promenade Deck at dusk carrying paper lanterns at the end of a stick. The lanterns were illuminated from the inside with a burning candle.