Pitman joined White Star Line sometime in around 1906. He served as fourth, third, and second officer on various company liners, including Majestic (1889) and Oceanic (1899).  Pitman was the only Titanic officer not in the Royal Naval Reserve.

Titanic
Pitman was resting in his quarters when Titanic struck the iceberg. After reporting for duty, he was told to report to the ship’s starboard side to assist in uncovering the lifeboats. After receiving a command to lower the boats, Chief Officer William Murdoch ordered Pitman to take charge of lifeboat No. 5. Pitman, along with the lifeboat’s occupants, were eventually rescued by the Cunard Line’s Carpathia.

‘The ship turned right on end and went down perpendicularly. She did not break in two. I  heard a lot of people say that they heard boiler explosions, but I have my doubts about that. I do not see why the boilers would burst, because there was no steam there. They should have been stopped about two hours and a half. The fires had not been fed so there was very little steam there. From the distance I was from the ship, if it had occurred, I think I would have known it.” —Titanic Third Officer Herbert Pitman

Pitman continued working for White Star Line after the Titanic disaster, but  White Star clearly wanted to put the disaster behind it, along with anyone connected to it. 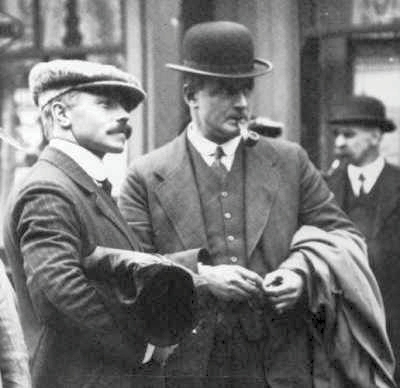 New Job, New Line
On 10 July 1912 Pitman re-joined Oceanic as her third officer. He later served as a purser because his eyesight was deteriorating. In the early 1920s, Pitman moved from White Star to Shaw, Savill, and Albion Line. He married a New Zealand lady, Mimi Kalman.

During World War II, Pitman served as purser aboard the Shaw, Savill, and Albion liner Mataroa. In March 1946, just prior to his retirement from the Merchant Navy, Pitman was awarded an MBE for “long and meritorious service at sea and in dangerous waters during the war.”

Retirement
In retirement, Pitman lived with a niece in Somerset. He passed away from the effects of a stroke on 7 December 1961 at the age of 84. Pitman was buried in the churchyard at Pitcombe, Somerset.