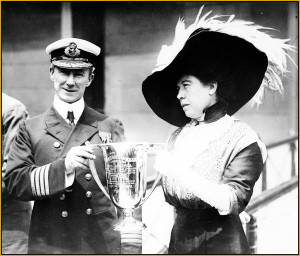 Born desperately poor, Brown achieved wealth beyond her wildest dreams by marrying a Colorado mine manager who soon discovered his own incredibly rich gold deposit.

Brown eventually separated from her husband and used her wealth to become a world traveler. She boarded Titanic at the end of a European jaunt.

After the ship hit an iceberg and began to sink, Brown made her way into Lifeboat 6. Once onboard, she took unofficial command of the craft and helped rescue several victims. To boost spirits, she regaled her fellow survivors with stories of her life in the Old West.

When newspapers learned of Brown’s courageous actions, they dubbed her “the unsinkable Mrs. Brown.” Leveraging her newfound fame, Brown became active in numerous causes, including women’s suffrage and workers’ rights. During World War I, she volunteered for the Red Cross in France.

“After being brined, salted, and pickled in mid ocean I am now high and dry … I have had flowers, letters, telegrams-people until I am befuddled. They are petitioning Congress to give me a medal… If I must call a specialist to examine my head it is due to the title of Heroine of the Titanic.” —Molly Brown, shortly after the sinking, in a letter to her daughter.

Brown’s money eventually ran out and she faded from the public view. Brown died in New York City, largely forgotten, on 26 October 1932. Yet her legend lived on.

The 1960 Broadway musical, The Unsinkable Molly Brown, revived Brown’s fame for a new generation. Brown surfaced again in 1997, thanks to a memorable portrayal by actress Kathy Bates in the film “Titanic.”