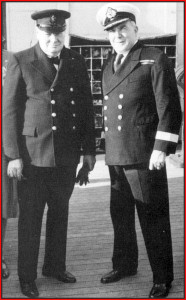 Bisset (right) stands next to someone, perhaps a port agent.

Bisset’s career almost precisely matched the golden age of ocean liners. As Carpathia’s second officer, he served under Capt. Arthur Rostron. He was on Carpathia’s bridge on the morning of 15 April 1912 as the heroic liner made her perilous dash to reach the sinking Titanic.

Bisset later served on or commanded many of the great, near-great, and not-so-great Cunard liners of the early- and mid-20th century. During World War II he was captain of both HMT Queen Mary and HMT Queen Elizabeth (for a total of 66 voyages). He also commanded Queen Elizabeth on her long-delayed maiden voyage in 1946. In the video above, Bisset is showing the refurbished liner to some royal guests.

A prolific author, Bisset wrote a three-volume autobiography describing the many ships and people he encountered during his lengthy career. The volumes, Sail Ho!—My Early Years at Sea (1958); Tramps and Ladies—My Early Years in Steamers (1959) and Commodore—War, Peace and Big Ships (1961), are must reads for any ocean liner fan.

Upon retirement from Cunard Line in 1947, Bisset and his wife retired to Sydney, Australia. He died on 28 March 1967, at age 83. His body was returned to England and  interred at Bournemouth.

To its credit, Cunard has not forgotten Commodore Bisset. He was one of six former company commodores recognized with a suite named in his honor onboard Queen Elizabeth (2010).