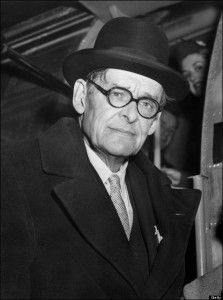 Queen Mary carried scores of celebrities during her long and storied career at sea. Most of these people enjoyed pleasurable, uneventful voyages. Yet for renowned poet and author T.S. Eliot, a June 1956 crossing was nearly fatal.

On 11 June 1956 Eliot, 67, suffered a heart attack on board Queen Mary, two days out of  New York on her journey to Southampton. Eliot was attended to by Queen Mary’s expert medical staff and spent the rest of the voyage in the liner’s hospital.

Upon arrival in Southampton, Eliot was taken off the ship in a wheelchair and transported to a local hospital. Eliot, who had a history of heart trouble prior to boarding Queen Mary, would recover to live another nine years.

With the publication of “The Waste Land” in 1922, considered by many critics to be the single most influential poetic work of the 20th century, Eliot’s reputation began to grow to legendary proportions. For the rest of his life, the American-born Eliot was the most dominant figure in poetry and literary criticism in the English-speaking world.