Swedish American Line’s Gripsholm (1957) left on her maiden voyage, Gothenburg to New York, on 14 May 1957. Gripsholm was a handsome, classically styled ocean liner that was afflicted with a classic case of bad luck and poor timing. 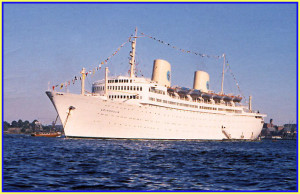 Gripsholm (1957) was a victim of bad Luck and poor timing

Like other liners of her era, Gripsholm faced a rapidly dwindling transatlantic passenger market. SAL finally tossed in the towel in 1971 and converted the liner into a full-time cruise ship.

After a bitter struggle with Swedish labor unions in 1975, SAL decided to get out of the cruise line business. That same year, Gripsholm was sold to Karageorgis Lines. Renamed Navarino, she cruised the Mediterranean until 1981 when she was accidentally grounded in the Aegean Sea, near Patmos.