For White Star Line Capt. Edward J. Smith, 10 April 1912 marked the beginning of a series of events that would ultimately define his long and distinguished career, but certainly not in a way he had ever hoped for or even imagined. 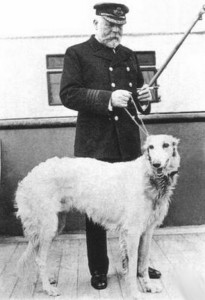 A White Star captain since 1887, Smith was a patient and kind commander with a gray beard and a barrel chest,  Although Smith could appear fearsome to a casual observer, he was actually a soft-spoken and gentle man, capable of inspiring great confidence among passengers and crew. He had a pleasant, quiet voice and a ready smile. A natural leader and a fine seaman, Smith was a model ocean liner captain.

Smith, 62, commanded a total of 17 White Star vessels during his career. His only unsettling aspect was that trouble seemed to have a way of finding him. Smith’s career was littered with a series of minor accidents and incidents.

On that Wednesday morning, Smith left his home wearing a bowler hat and a long overcoat. He then took a taxi to the Southampton docks. He boarded Titanic at 7 a.m. to prepare for the liner’s noon departure.

It was a routine Smith had followed many times before, but never would again.

“I cannot imagine any condition which would cause a ship to founder. I cannot conceive of any vital disaster happening to this vessel. Modern shipbuilding has gone beyond that.”
—Edward J. Smith, 1907,  upon the maiden voyage of Adriatic.