If you think that age discrimination is a recent trend, consider this article, published in the New York Times on 4 January 1910: 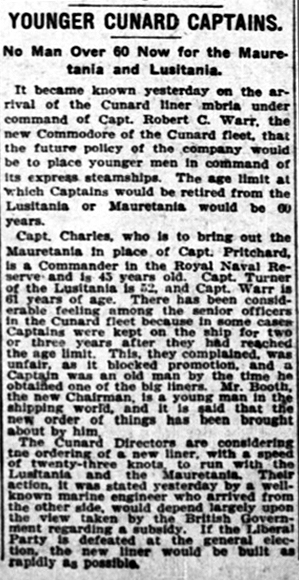 Such a policy, would of course, be illegal in both the UK and US under current laws. Yet it’s interesting to study Cunard’s rationale for imposing the age limit: defusing disgruntlement among younger, senior officers. The article makes no mention, of course, of women captains. Sadly, such a notion would have been considered outlandish in 1910.

As for that proposed third express liner to run with Mauretania and Lusitania; that would be Aquitania, which was launched in Apri 1913.

Incidentally, the liner “mbria” mentioned in the story’s second line is undoubtedly “Umbria.”